Navigation, Bluetooth Handsfree, Panoramic Sunroof, Power Liftgate, Heated Front Seats, Heated Rear Seats, X3 xDrive28i, 4D Sport Utility, 2.0L I4 TwinPower Turbo, 8-Speed Automatic, AWD, Jet Black, Beige/Black w/SensaTec Leatherette Upholstery, 18" x 8.0" V Spoke (Style 307) Wheels, ABS brakes, Advanced Real-Time Traffic Information, Anti-Theft AM/FM Stereo CD/MP3 Player, Auto-dimming door mirrors, Auto-dimming Rear-View mirror, Automatic temperature control, BMW Connected App Compatibility, BMW Online & BMW Apps, Cold Weather Package, Driving Assistance Package, Electronic Stability Control, Front dual zone A/C, Fully automatic headlights, Garage door transmitter, Hands-Free Bluetooth & USB Audio Connection, HD Radio, Heated Front Seats, Heated Rear Seats, Heated Steering Wheel, Hi-Fi Sound System, Memory seat, Navigation System, Outside temperature display, Panic alarm, Panoramic Moonroof, Power driver seat, Power Front Bucket Seats, Radio BMW Professional, Rear-View Camera, Remote keyless entry, Remote Services, Retractable Headlight Washers, Satin Aluminum Roof Rails, Security system, Split folding rear seat, Steering wheel mounted audio controls, Traction control. 21/28 City/Highway MPG North End Motors has been serving New England since 1986. North End Motors is one of the largest Independent used car dealers in Massachusetts. We are family owned and family operated with an emphasis on customer service. We are proud recipients of the Dealerrater Consumer Satisfaction Award for 2015, 2016, 2017, 2018, 2019, 2020, and 2021 along with being Cargurus Top Rated Dealer in 2020 and again in 2021. Customers appreciate our no haggle one price shopping experience that is straight forward, transparency and no gimmicks. That’s why we have 1000’s and 1000’s of online reviews. We have over 40 lenders with programs that have some of the lowest rates available to programs for less than perfect credit and everything in between. We also offer one of the best first time buyer programs available. We have a large service department on site allowing us to service each one of our vehicles once when they first arrive and a second time prior to delivery along with a complete professional detailing service so we know you are getting the best quality vehicle. With us the sale doesn’t end when you drive your vehicle home, we stand behind every vehicle we sell. Come join our family and you will be happy you did! **Vehicle comes with 1 key and 1 remote, an additional key can be purchased by the customer at our dealer cost. We make every effort to make sure our listing of options and trim levels are 100% accurate. Price Does Not Include Standard $695 Documentation Fee, Taxes, Title or Registration Fees. Please double check the vehicle before purchasing for any blemishes as well as any listed or unlisted options.** **Please be advised that we make updates to the inventory constantly, due to the volume of sales we recommend to check availability in order to ensure the vehicle of interest is available. If you are planning a visit for a viewing, please contact us to make us aware of your visit so we can inform you of any changes in the vehicle's availability.**

Model Overview
The BMW X3 comes in four models: sDrive28i, xDrive28i, xDrive28d and xDrive35i. 28i models have a TwinPower turbocharged 4-cylinder engine, displacing 2.0 liters and making 240 horsepower and 260 lbs-foot of torque. Peak torque is achieved at just 1,250 rpm, so this engine is very responsive; it can move the X3 to 60 mph in just 6.5 seconds and to a governed top speed of 130 mph. The 28d model uses a 2.0L 4-cylinder diesel engine that makes 180 horsepower and 280 pound-feet of torque. Lastly, the 35i model comes with a 300-horsepower, 3.0L turbocharged inline-6 that's the choice for those who want the most performance. Both gasoline engines utilize "Valvetronic" variable valve timing and direct fuel injection.
With any engine, the X3 has a responsive and quick-shifting 8-speed automatic transmission, and it includes an Eco Pro mode that, when the button is depressed, helps improve fuel economy by optimizing heating and air conditioning use, softening accelerator response and changing shift times. All models also have Auto Start/Stop, which shuts off the engine when waiting at stoplights--starting quickly when the brake is released; and Brake Energy Regeneration essentially saves fuel by using the alternator smartly. Fuel economy ratings are 21 mpg city, 28 highway with the xDrive28i, or 19/26 with the xDrive35i.

Most versions of the X3 offer the xDrive intelligent all-wheel-drive system, which works together with the stability control electronics and normally send 60 percent of torque to the rear wheels; a multi-disc clutch system can send up to 100 percent to the rear wheels when it's needed for traction -- whether by a slippery road situation or high-performance driving. X3 models also have Servotronic speed-sensitive steering, although a Variable Sports Steering -- essentially a variable-rack system -- is optional. The X3 rides on run-flat tires.

The interior of the X3 is set up like a wagon, only with a somewhat higher seating position and plenty of headroom. Ingress and egress are easier than in a sedan and the back seat can fit three across, albeit snugly. There's a ski pass-through and the rear seatback is split 40/20/40 so that it can be folded for any combination of passengers and cargo. The X3 also offers a number of small storage cubbies in the doors, the dash and center console. 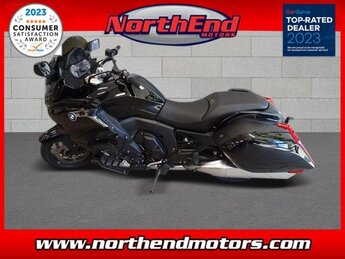