Bluetooth Handsfree, Sunroof / Moonroof, Leather Seating, Heated Front Seats, 17" Wheel & Tire Package, 7.5J x 17" 5-Arm-Dynamic Design Wheels, ABS brakes, Audi Music Interface w/iPod Integration, Automatic temperature control, Bluetooth Preparation for Mobile Phone, Convenience Package, Driver Information System, Electronic Stability Control, Front fog lights, Garage Door Opener (HomeLink), Heated door mirrors, Illuminated entry, Panic alarm, Power moonroof, Radio: Audi Concert System w/1CD Player, Rain sensing wipers, Remote keyless entry, Steering wheel mounted audio controls, Traction control. 20/30 City/Highway MPG North End Motors has been serving New England since 1986. North End Motors is one of the largest Independent used car dealers in Massachusetts. We are family owned and family operated with an emphasis on customer service. We are proud recipients of the Dealerrater Consumer Satisfaction Award for 2015, 2016, 2017, 2018, 2019, 2020, and 2021 along with being Cargurus Top Rated Dealer in 2020 and again in 2021. Customers appreciate our no haggle one price shopping experience that is straight forward, transparency and no gimmicks. That’s why we have 1000’s and 1000’s of online reviews. We have over 40 lenders with programs that have some of the lowest rates available to programs for less than perfect credit and everything in between. We also offer one of the best first time buyer programs available. We have a large service department on site allowing us to service each one of our vehicles once when they first arrive and a second time prior to delivery along with a complete professional detailing service so we know you are getting the best quality vehicle. With us the sale doesn’t end when you drive your vehicle home, we stand behind every vehicle we sell. Come join our family and you will be happy you did! **Vehicle comes with 1 key and 1 remote, an additional key can be purchased by the customer at our dealer cost. We make every effort to make sure our listing of options and trim levels are 100% accurate. Price Does Not Include Standard $695 Documentation Fee, Taxes, Title or Registration Fees. Please double check the vehicle before purchasing for any blemishes as well as any listed or unlisted options.** **Please be advised that we make updates to the inventory constantly, due to the volume of sales we recommend to check availability in order to ensure the vehicle of interest is available. If you are planning a visit for a viewing, please contact us to make us aware of your visit so we can inform you of any changes in the vehicle's availability.**

Model Overview
The A4 and S4 are offered for 2013 in a total of five different powertrain combinations. There's a base front-wheel-drive A4, all-wheel-drive A4 quattro models in either automatic or manual-transmission guise and the higher-performance S4, also offered with an automatic transmission or manual gearbox.

A4 models all come with a 2.0L 4-cylinder engine with direct injection and turbocharging; the engine makes 211 horsepower and 258 pound-feet of torque. There's a choice between a 6-speed manual or 8-speed Tiptronic automatic transmission in quattro all-wheel-drive models or a continuously variable automatic transmission in the base front-wheel-drive A4 model. The S4 steps up to a supercharged 3.0L V6 engine making 333 hp and 325 lb-ft, and it's paired with either a 6-speed manual gearbox or a 7-speed S-tronic automatic.

Most of the A4 lineup and all of the S4 lineup includes quattro all-wheel drive; it's already calibrated to send power to whichever wheels can use it most, but the S4 has an available rear sport differential with torque vectoring to help with stability and poise. Electromechanical power steering provides some feedback from the road, while a dynamic steering system is also offered, adjusting its input based on vehicle speed. Across all the models, Audi drive select gives the driver four modes--Auto, Comfort, Dynamic and Individual--to custom-set variables for steering throttle response, transmission behavior, and suspension settings.

The A4 can be had in Premium, Premium Plus and Prestige trims--each bringing progressively more standard features--with the S4 only offered in the top two trims. S4 models get special Alcantara (faux-suede) trimmed sport seats, along with suspension and braking upgrades in addition to the added power and other equipment.

Both of the lineups have some of the same exterior and interior styling, which follows classic sport-sedan proportions on the outside, along with a cockpit-theme design inside, but one that affords a little more spaciousness. On the outside, the A4 can be equipped with an adaptive lighting system and optional LED headlamps, while the S4 gets a few styling cues of its own, including special alu-optic side-mirror housings, a unique grille design, plus special designs for front aerodynamic work and the exhaust.

The A4 and S4 lineup this year get a streamlined version of Audi's MMI (multi-media interface) controller--now with a dial plus four buttons. The MMI Navigation Plus system includes a 7-inch LCD monitor that's a central point for navigation, audio, communication and vehicle settings. It also includes 40 GB of hard-drive space for music storage and the system can read SD cards and includes a CD/DVD drive. Additionally, a 14-speaker, 505-watt Bang & Olufsen audio system is offered.

Other standard equipment on all models includes fog lamps, a sunroof, heated windshield washer nozzles, heated power mirrors, leather upholstery, keyless entry, cruise control, a 12-way power driver's seat and a 10-speaker, 100-watt sound system with CD and SD capacity and Sirius satellite radio. Premium Plus models add 18-inch upgraded wheels and tires, xenon headlamps, LED tail lamps, auto-dimming side mirrors, an iPod adapter, Bluetooth hands-free, heated seats, a universal garage-door opener, and 3-zone automatic climate control. At the top of the lineup, Prestige models add adaptive headlamps, a color driver information system, a hard-disc-based navigation system, Audi Connect and the 505-watt Bang & Olufsen sound system with HD Radio and 14 speakers.
Model Strengths
Handsome Exterior Styling
Sporty, Stylish Interior
Powerful Yet Fuel-efficient Powertrains
Excellent Quattro All-wheel-drive System
Advanced Infotainment And Navigation Systems
Model Changes
For 2013, the Audi A4 lineup gets some slight changes inside and out, including new interior and exterior color combinations. On the outside, the A4 gets a more slender headlight design, new "Singleframe" grille design and a strip of LED lights adjacent to the headlights with the xenon headlamp option. The taillight design is also new, with LED lamps and the hood and bumpers have been redesigned. Inside, the A4 gets a new high-gloss finish and 'alu-optic' soft keys for the MMI interface and the Audi Connect system is paired with MMI Navigation Plus. Also available (and standard on the S4) is a new 3-spoke flat-bottom steering wheel and alu-optic shift paddles on the automatic.
The available adaptive front lighting system in the A4 and S4 gets a new static cornering lamp and there's a new Driver Assistance package that pairs adaptive cruise control and dynamic steering.

Also, some A4 2.0T models are E85 compatible for 2013; all A4 models get electric power steering; and the S4 receives a new crown-gear center-differential.

The A4 Avant wagon has also been discontinued for 2013, replaced by a new A4-based Allroad wagon model that's now a separate model with a more outdoorsy theme.
Model Value
The Audi A4 competes with top sport sedans from Germany, Japan, and the U.S., including the BMW 3-Series, Mercedes-Benz C-Class, Cadillac ATS and Infiniti G37, as well as the Acura TL. Among these models, the A4 offers one of the best compromises between comfort and performance, as well as exterior and interior designs that are superbly coordinated. With its 2.0T engine, the A4 is also one of the most fuel-efficient models in its class, while the S4 offers one of the highest power outputs, excluding track-focused models. 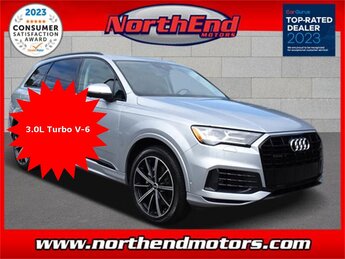